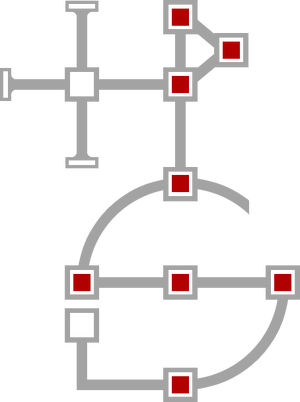 The Priory of Sion (Prieuré de Sion) was a sister order to the Templar Knights, elusive and mysterious even to the Templars themselves.[1] When the Templars fell in the 14th century, the Priory retreated into the shadows to ensure the survival of their new world order idea, researching grailstone and biding their time.[2]

Nobody at Aeternis really understood the extend of the Priory's activities or their reach. Unbeknownst to them, the Priory embedded two agents within Aeternis, Malik and Philip, and staged an attempt to seize the Grail by its agents in 1307, so that the Guardians would seal the Temple. [3] Trading their allegiance for security,[4] the Priory experimented with grailstone supplied by Malik to create their own seer and verify Tobias de Treece's visions.[5] His brother, Cesar de Treece, proved the perfect candidate and under his guidance, the Priory verified the vision and amended their plans for control of the world. Meanwhile, Malik's research within Aeternis continued, consuming his sanity. Eventually, as Malik went rogue, Philip was promoted to senior operative and tasked with the former agent's disposal.[6] The plan succeeded half-way: While Aeternis was made safe, Malik escaped into the outer world with grailstone and his own plans for world domination.[7]

The Priory accepted it as a matter of fact and waited for the vision to start becoming reality. As the turn of the 20th century approached, the environmental upheaval and social unrest signaled that the time had come for its plans to bear fruit.[8] Interpreting the earthquakes as the first of four signs, the Priory leaked the testament of Sir Guy of Bramley to Colin Scott, leading him to discover Aeternis. Letters in his name have also been sent to other raptors to increase the chances of success.[9] As the raptors worked their way towards the Grail, Priory operatives waited outside Aeternis for the Holy Thief to emerge with the Grail and take him into custody. This capable man would become the founding father of a new empire, as the Priory built New Jerusalem under the protection of the reformed Templar Order. Besieged by dying hordes of humanity egged on by Malik's insane plans, the Priory would carefully use the Grail to save only the best humanity has to offer, to usher in a brave, new world built on the ashes of the old one.[10]

Community content is available under CC BY-NC-SA 3.0 unless otherwise noted.