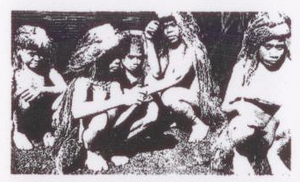 Mogs were intended to be one of many creatures encountered in Aeternis, with Lurka a prominent member of their group. The original design idea for them is reproduced below:

Mogs are an extremely ancient form of human being that inhabit certain rooms and chambers within Levels One, Two and Three. They are infact the missing link between man and ape and are secretive, private and jealously guard their territory against Intruders.[1]

They have evolved within Aetermis and can now speak a crude form of English, but their intelligence is still fairly limited. A player coming into Mog territory will be asked politely but firmly to find another route. Doing so will show respect for their privacy and may bring benefits later in the game. Continuing to invade their territory will often provoke them to violence. Sometimes this is unavoidable, particularly if being pursued by a Guardian, but a player can usually see them off with the help of his modem weapons. By doing so however, that player will then be marked as a'Mog enemy' for the rest of the game.[2]

Their weapons are crude spears and arrows, but their intimate knowledge of the territory and their natural stealth make them dangerous opponents. Their are six tribes living within Aeternis, each tribal group numbering about ten individuals.[3]