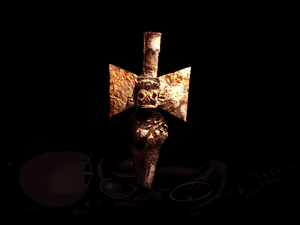 An ancient idol, created by the Byzantines.

Byzantines were an ancient group of people that inhabited Europe (including the sites of present day Wick, Scotland, and Istanbul, Turkey) beginning from 2000 BCE. They were Indo-Aryan tribes from north-eastern and central Asia that swept India and Europe in a vast unstoppable migration, before settling Led by their chiefs and priests, this swarm of humanity, made up of dozens of individual tribes took everything in its path and settled the subcontinent. The crucial difference between them and other tribes that inhabited Europe was the discovery of grailstone near the Bosphorus. Intrigued by its luminous quality and its effects on humans, the Byzantines fashioned the recovered grailstone into the Holy Grail and continued their westward migration, with one tribe eventually settling on the British Isles.[1] Starting with 1900 BCE, the caverns below Wick are settled and eventually become a thriving civilization.[2] A civilization far beyond that which existed in Africa and the Middle East at the time.[3]

The Byzantines were capable of incredible feats of architecture and engineering. They have used the natural caverns as basis for building a ziggurat, places of worship, and even an entire city, resting on the shores of a vast underground lake echoing with the calls of prehistoric creatures. As they refined their technology, their understanding of grailstone increased, in no small part due to extensive experimentation on living subjects. The grailstone also led to the development of the cult of Maal, a brutal religion featuring human sacrifice and consumption of toxic, mind-altering concoctions intended to bring about a communion with the pagan god. Due to unknown reasons, the Byzantines eventually disappeared, although not before leaving behind a massive amount of artefacts and knowledge that would later form the basis of Malik's experiments.[4]